Questions From Friends (Part 1): Is Our Universe A Simulation?

I've had a couple of interesting geek-type questions from friends recently, and as Twitter is a bit too limited for long explanations this is probably the place to explore them.

The first question is from Twitter's @LoisAnnounces, an expert on both cultural geography and asking awkward philosophical cosmology questions:

(For those not familiar with the link, arXiv is a "pre-print server" where draft versions of physics papers are published, allowing free access to anybody who wants it - a very good system which other subjects are starting to follow.)

The paper in question, "Constraints on the Universe as a Numerical Simulation" by Silas R. Beane, Zohreh Davoudi and Martin J. Savage (BDS) (direct link to the PDF) builds on the ideas presented in a famous paper published by Nick Bostrom of Oxford University, entitled "Are You Living in a Computer Simulation?".

The central crux of Bostrom's argument is that if Moore's Law continues then at some point in the future we'll have enough power to simulate, to the last particle, entire chunks of the universe, from whole molecules (now/near future) to biological cells, multicellular organisms and even, in the distant future, whole cities, planets, galaxies or, at the limit, a whole universe.  He then goes on to ask what the odds are that we're living in the "one original universe" or one of the countless simulations that an advanced civilization could create - the implication being that the odds are in favour of some variant on a "Matrix" scenario - we're all probably living in a computer simulation of some description.

While this makes for a very nice bit of philosophical theorising, it's not actually definitive in any way - what's needed is some sort of test before we all start learning Kung Fu, wearing lots of black leather and attempting to escape from our digital world.  This possibility of performing such a test is the main theme of the BDS paper (which, I should point out, is well beyond my limits in many ways!)


A great many "simulations" exist in physics - in fact, it could be argued that a good definition of physics is "the search for the simplest possible way to make a universe that matches ours".  From Newtonian mechanics to relativity, string theory and dark matter, all physics really is is a series of computer programs which seem to accurately mirror the universe around us (precisely why we can develop programs like this is a different, and equally fascinating question), and the specific "program" in the BDS paper is something called lattice quantum chromodynamics (lQCD), which thankfully is easier to explain than it is to actually do! 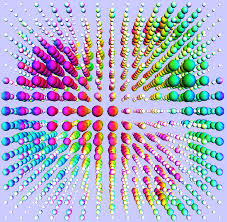 There is no Theory Of Everything at the moment (well, string theory might be, but nobody knows yet), so physicists tend to work on their own little subsets of reality in the hope that everything can be joined up later.  lQCD is a technique that deals solely with quarks, the particles which make up most matter, but doesn't include electrons (in other words there's no chemistry in this program) and also doesn't handle time, gravity or light in any meaningful way, so it's not a complete simulation.  The basic technique is to create a lattice, a grid of points in space, and give it a starting position with all the quarks in various positions, then run the simulation to find out what happens.

It's a remarkable powerful technique, and seems to match reality extraordinarily well.  It also has another interesting feature, which is that it's very efficient - in fact, it may be the most efficient way to simulate this small chunk of reality, and this is where it gets interesting.

The universe tends to do things as efficiently as possible - for example, there aren't, as far as anyone can tell, two different systems to make gravity work and to handle the conservation of angular momentum, one necessarily implies the other, it's all tied up in the one theory.  Space and time are another example - once thought to be two entirely separate entities, Einstein's work a hundred years ago led to the realisation that they were two sides of the same coin.  So, the BDS paper asks, could the universe actually be running on lQCD?

They've taken a simple, effective form of lQCD and assumed the universe plays by exactly these rules - and then they've done the classical science thing of asking what that universe would look like if this was the case.  Obviously, yes, it will be very similar to ours, that was the whole point of developing lQCD in the first place, but this is never a guarantee - Newton's law of gravity stood for several hundred years before we found a mismatch between it and reality.

The main prediction they find is related to the "GZK cutoff", a complicated way of saying there should be a maximum energy for any cosmic ray particle hitting the Earth.  This is something that is predicted by many theories, and the big test for many of them is exactly where this cutoff applies - something which is still unclear.

The nice thing about the BDS paper is that they're able to relate the GZK cutoff to the actual spacing of the lattice in lQCD - if our universe does run on lQCD then we can potentially discover this, and even find out some of the settings under universe -> file -> preferences.

So, returning to the original question, are we living in a simulation?

We're back to philosophy here - specifically the identity of indiscernibles. Let's assume that the universe does actually use lQCD - this doesn't actually imply a simulation scenario.  Yes, it could be a simulation, but it could equally well just be "the way things are".  Mathematical models crop up all over the place; plants grow in fractal structures, cicadas mate on a prime-number based pattern of years and the Golden Ratio seems to be behind many features in the natural world, but this doesn't mean there's some sort of Grand Simulator furiously tapping away on a keyboard.

If the universe obeys a "program" such as lQCD it doesn't have to mean there was a programmer, just as the existence of Pi doesn't imply the physical existence of a mathematically perfect circle (which, ironically, is impossible under lQCD).

Long story short? I can't put it any better than the great Randall Munroe, of xkcd.com (yet again).