Our much loved cat, Henry, died a couple of weeks ago.  We had him euthanised because he had Robotic Cat Syndrome (RCS) and had reached the stage where he had trouble doing everyday cat things.  We're pretty gutted to be honest, but hopefully our experience can be of some use to others.

RCS is a fairly rare condition which only affects cats in the North East of Scotland, roughly the triangle formed by Aberdeen, Aviemore and Inverness.  The only real study of the condition and anecdotal evidence from our vet suggests a hundred or so cases have been found.  It's most likely a viral infection picked up from the bird or rodent population, and causes a slow loss of motor skills, typically over the course of a couple of years.

A disclaimer at this point - I'm not a vet, the only biological science education I have is a first-year biology course I did at university (Feynman's "map of a cat"), and I've not even been able to read the only peer reviewed paper on the subject because it's behind a paywall (insert rant here). This isn't veterinary advice, it's the experience of one owner. If you have any kind of concerns about your cat then please ask a real vet, not me.  DON'T PANIC. RCS is rare and restricted to a fairly small area. And it's not the end of the world, see below.

We first found out Henry had RCS because we took him to get his back claws trimmed.  We thought he was having trouble scratching because they were too long, but the vet immediately spotted that he was moving strangely.  I grew up with dogs, so I'm not used to cats, but a cat-fluent friend had also suggested something wasn't quite right.  He was holding his tail out a little stiffly and his back legs weren't quite as fluid as they should be.

Over the next six months or so he lost much of the strength in his back end, with the thigh muscles visibly wasting.  He stopped jumping up on objects pretty much in order of height - he'd previously been able to jump a good 4ft+ from a crouch, but six months after the first suspicion he was limited to the couch and (usually) my favourite chair.

He then gradually deteriorated over the next year, with movement becoming more and more awkward and moving forwards towards the head.  He was still capable of quick movements, as evidenced when he was startled by a friendly German Shepherd which snuck into the house, but that was clearly quite adrenalin charged, most of the time he adopted a careful plod which gradually got slower.

At no point did he seem to suffer from any mental problems - he was clearly a little frustrated, but he didn't exhibit any of the confusion that have been reported in some RCS cases.  Nor do we think he was in any great pain at any point.  When we last took him to the vet, about two weeks before he died, the vet didn't believe Henry was in any pain, but agreed with us that he was starting to lose his basic "being a cat" functions.

What You Can Do To Help The Cat

Other Things You Can Do

Our vet prescribed Metacam, a drug similar to Ibuprofen, but for cats. Please, go with the proven veterinary pharmaceuticals, "alternative veterinary medicine" is designed to make you feel better, not the animal.  Metacam seemed to make Henry far more able to relax and he enjoyed it as a "treat" straight from the oral syringe.

Help them scratch/wash.  They can't reach up with their legs easily, so Henry seemed to enjoy a good firm rub with my palm.  I'd also moisten my hands with a little water and stroke him firmly to clear any matted fur.

Keep them active.  It can't hurt.  The cat finds moving difficult, so it will move less and lose muscle tone, which means moving is more difficult...if the cat enjoys chasing string or whatever then encourage this.


Don't Confuse It With:

Lyme disease & others - RCS does not make the cat sick (eg feverish, vomiting, loss of appetite).

Arthritis - The symptoms are similar, consult a vet.

Henry is buried in his favourite spot by the shed.

He is now more powerful than the mice can possibly imagine. 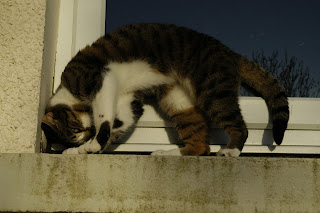