How To Prove Einstein Wrong

Physics exists on a spectrum, from the incredibly rigorous, through the vague and "hand-wavy" to the borderline crackpot - and there's plenty of room at the bottom.  For some reason physics attracts the crackpot, there's no shortage of claims of perpetual motion machines, "proofs" of god and the great favourite, "I've proved Einstein wrong" - ask any physicist and you'll probably find they've received plenty of emails along those lines, almost all of which "aren't even wrong", a very specific physics insult used for hypotheses which aren't testable, well defined, or rely on the Universe doing things which would break every known and tested physical law. 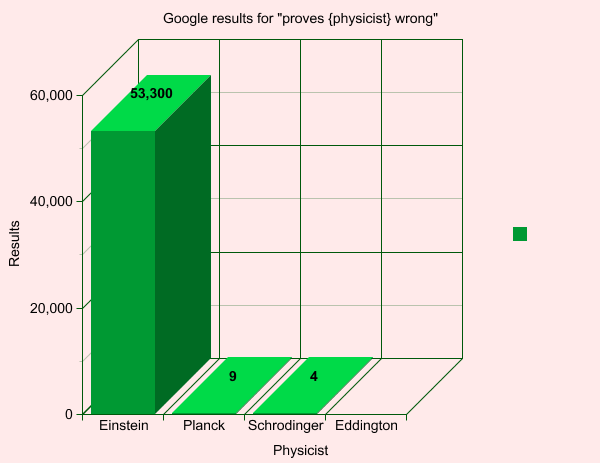 Why does Einstein get singled out? Why don't we see claims of "proving Planck wrong" all over the internet? Or even Arthur Stanley Eddington, who despite being an excellent physicist had some exceedingly crackpot ideas himself and is very easy to prove wrong - and yet returns zero results?  I'd suggest Einstein's continuing fame is a major factor, everyone wants to beat the person at the top.  Add to this the fact that there's some known "issues" with Relativity, specifically the Dark Energy and Dark Matter problems, and he becomes the prime target.

But whilst the majority of attacks on Relativity lie firmly in the realms of crackpottery, "proper" physicists continue to examine, reformulate and test the theory.  A great example is Mike McCulloch's work, which I've spent some time getting my head around recently.  He's a lecturer in geomatics, the study of measuring positioning in space which, while technically and historically is a branch of geography, is conducted using GPS and other satellite based systems these days, which means you're working almost exclusively in Einstein's realm, the mathematical model of relativistic spacetime.

The theory he's developing is called "Modified inertia by a Hubble-scale Casimir effect", or MiHsC, and it's a fantastic example of a proper, non-crackpot, approach to the problems in modern cosmology.

There are three main issues with the basic theory of Relativity, one from a theoretical basis and two brought up by observation.
The first is the simple fact that in the last fifty years we've not been able to mesh the two main theories of physics, General Relativity and Quantum Field Theory.  Both work, and for all everyday purposes we can pick whichever theory we need, quantum theory for anything very small (such as the subatomic experiments being conducted at the LHC) and relativity for the big stuff, like the orbit of planets or the behaviour of clocks on satellites.  We can even use them at the same time, such as the relativistic change to atomic clocks on satellites (which GPS relies on) or the way the LHC can give protons an bigger "punch" and create much heavier particles like the Higgs.  But push things too far - like the center of a black hole or the behaviour of the universe in the first tiny fractions of a second and things break down.  The graphs go off the scale, the theories don't mesh, and we end up with nonsensical results - that kind of thing makes a physicist's brain itch. A bigger theory is needed.
The other two problems are both brought about by observation - if you take the simple, original version of relativity then it doesn't match what we see in the sky - galaxies rotate too quickly (known as the "Dark Matter" problem) and the universe is not only expanding, but the expansion is accelerating, which is the "Dark Energy" problem.  Don't let these names fool you, they're both really placeholders for whichever correction-or-replacement is needed in the current theory.

MiHsC is a whole new approach to the origin of mass - specifically inertial mass.  It may surprise you to hear, but there's lots of different kinds of mass. The two we're looking at here are gravitational mass (the one that gives something "weight") and inertial mass, which is what makes something big more difficult to move.  The two are thought to be the same thing, something referred to as "the equivalence principle", but note that this is just a principle - plenty of experiments have been performed to check this principle, from Galileo dropping cannonballs from the Pisa's tower to the Apollo 15 astronauts dropping a hammer and feather on the Moon.  If the equivalence principle holds then dropped objects will always fall at the same speed - the inertial mass will always match the gravitational mass perfectly.  But these experiments aren't conclusive - we've not tested it in every regime, there's plenty of wiggle room for a difference to be found.
What McCulloch is proposing is a new idea for an origin of inertial mass, and this could potentially result in the slight changes in behaviour at low accelerations, which could explain Dark Energy and Dark Matter without having to discover new particles or new energy fields, something which has so far eluded experiments.

This new origin is based on something called the "Unruh Effect" (in itself, not a proven concept, but a well developed and reasonably testable theory), which predicts that an accelerating object will "see" a field of radiation, in effect space "pushes back".  This already sounds like a form of inertia, and McCulloch develops this idea to look at what happens at the extremes.  The radiation pushing back must have a wavelength, and as the object accelerates faster the wavelength must be shorter, in the same way the Doppler effect makes a police siren sound higher and higher pitched (ie a shorter wavelength) as it accelerates towards you.  At the opposite end, for very low accelerations the wavelength must become longer and longer...which eventually gives us a bit of an issue.
The length of a wave can be limited - you can't have very long waves in small harbours, to steal his example, if there's a barrier of any kind then there's a limit to the wavelength, and we have a very considerable barrier at the largest scales, the "cosmic horizon".  The longest wavelength that can be part of the Unruh effect, he claims, is twice that of the diameter of the observable universe, in other words two nodes, like a guitar string being plucked with no harmonic.  To be longer than this the wave would need to originate outside our universe, to have started before time itself started, which is impossible.  This means that there's a limit to the Unruh effect at low accelerations, which means a limit to the inertia of an object - very low forces no longer perfectly obey Newton's laws of motion, there is a minimum acceleration possible, which is all starting to sound a bit like quantum theory.

Some physics-equivalent of back-of-an-envelope calculations shows that this could (to within an order of magnitude or so) provide the basis for Dark Energy - as the universe expands the cosmic horizon changes, meaning our "quanta of inertia" drops, leading to a feedback loop causing cosmic acceleration.
Again, a rough application to galaxies shows that if inertia is reduced at very low accelerations - the outlying edges - then gravity would seem to have a larger effect than expected, which looks just like the solution to the Dark Matter problem.

So it's an attractive theory.  There's a realistic mechanism, it makes predictions which are testable within the limits of current or near-future technology and observations, and natural solutions to the two big problems within Relativity seem to just "fall out" of the theory.

Putting my "realistic" hat on there's plenty of pitfalls - it relies on an unproven effect and it's still at the "orders of magnitude" scale of development, the cosmology equivalent of a sketch.  But it's a recognisable sketch and it's a sketch doesn't rely on disproving the existence of metaphorical paper and pencils.  It doesn't prove Einstein wrong, it simply provides a slightly bigger picture which includes Einstein's work, but with subtle changes to make the limiting cases behave in a realistic manner - precisely what Einstein did with Newton's work in fact.

And so what if he does eventually turn out to be wrong?  If McCulloch didn't propose it then somebody else would eventually come up with the idea, so there's no time wasted, and the payback if he's right is huge, yet another "new view of the universe" moment.

And if we do want some crackpot in our theory? Well, it does raise the idea of blocking inertial effects in some way...