You have to admit, this picture is cool.... 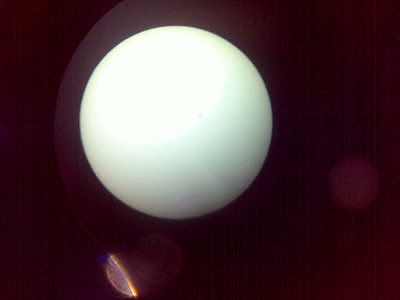 That's a picture of the Sun.  The nearly unimaginably huge ball of hydrogen that's so big it dominates the Universe for several light years.  It's so big that the entire planet Earth barely registers as "assorted debris" if you do a quick audit of the Solar system.

Me and my mate Ben B^2 took that photo during a few minutes of downtime at work recently, we both had a few minutes off so we set up a telescope (we sell them, it's a bookshop that does geek stuff too), we added a solar filter (you must use one if you don't want to go blind) and we took a quick snapshot of the Sun.

It's all dirt cheap if you're lucky enough to live in the western world (but that's another post), just £130 for the telescope, £30 for the filter and a free phone in return for a contract.  £30 would get you a comparable camera.  So, for a total cost of £200-ish we've take a really bad quality astronomical photo.

If you look closely, near the centre of the Sun, just to the right of centre and up a bit, there's a dark splotch.  (Click on the image to get a zoomed version)  That's not a glitch in the picture, that's a real, honest-to-goodness sunspot.  That's an active region of a star. 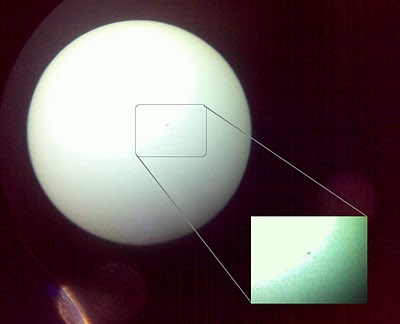 It's huge, at least the size of the Earth, probably several times bigger.  In fact, there were two to the naked eye, but the pic doesn't have that resolution.  Sunspots are important indicators of the "weather" on the Sun, they can be used to predict, for example, the Sun's effect on the Earth's average temperature, quite an interesting bit of data at the moment,  Take three or four pictures like that a day and you're well on your way to having data the scientific community will find useful.