I'm being out-evolved by something living behind my fridge. We've got a mouse in the flat. It's no big deal, the Old Town of Edinburgh is swarming with the blighters, the place is a six hundred year old labyrinth, bridges have been built over streets, covered up, filled in, tunnelled through, it's a mouse paradise. They're not usually much bother - the bleepy deterrents normally do the job, and on the rare occasions when they get a bit overly courageous we put down poison. No, it's not the kindest method, but it is one of the few that works on Old Town mice, and kinder than those sticky traps.

The mice, however, seem to have got wise to it, the poison doesn't work anymore. Actually, that's not technically accurate. I'm sure the poison still works, the mice just aren't falling for it any more. Not because they know it's poison of course, they don't, the absence of very small toxicology textbooks is all the proof I need of that. They're just not touching the stuff any more. What must have happened is that sometime in the last couple of years there was a community of mice. Most of them liked blue coloured grain, they took it and ate it and died hopefully peaceful deaths from hypothermia. A couple of them didn't. For some reason or another they didn't go for the free food. Maybe it was the smell, maybe the colour, maybe they just didn't like the taste - maybe they're refined mice and expect more presentation than a small plastic tray. For whatever reason, they didn't eat it. So most of the mice died...but a few survived to have baby mice. The baby mice inherited their parents' dislike of the grain we put down, so they don't touch it either, and they have more babies, none of who are partial to warfarin laced wheat. 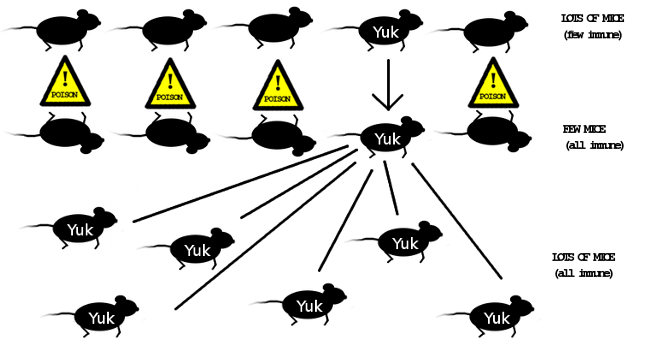 Nothing has changed except the fact that the humans are a weapon down in the ongoing struggle for Old Town domination. The drugs don't work.

So if anyone doubts evolution, I've got some mice you should meet.


Speaking of evolution, which came first, the chicken or the egg? It's a bloody stupid question. Ever since I was a kid I've hated this one. The fact of the matter is, the egg came first, end of story, argument over, you're very welcome.

Firstly, let's go a little further back. There weren't always chickens. There were dinosaurs, and then there was Archaeopteryx, then there were the proto-chickens. Humans began to domesticate these birds and slowly they crept their way towards full-blown chickenhood. Of course, what constitutes full-blown chickenhood is still up for debate - there's maybe one specific genetic tweak that produces some morphological change that defines a chicken, but the point remains: however you define a chicken, there was a first one.

The first chicken hatched from an egg that was laid by an animal that wasn't a chicken. It was very nearly a chicken, in fact you'd probably need to run a battery of tests to confirm that it wasn't a chicken. This nearly-chicken laid an egg. As is the way with the world, the reproduction from adults to offspring wasn't perfect, there were small glitches in the DNA. Most of them did very little indeed, but in this case there was one tiny error in the strand that made the offspring a little different to anything that went before. It was a chicken, the first in a long, noble and tasty line.

The egg came first, but it wasn't laid by a chicken. End of discussion, game over, QED.
Posted by Geoff at 21:15