Just remember that you're standing on a planet that's revolving...

There's a little poetic license in Monty Python's classic, it's actually just over that, closer to 1040 miles an hour at the equator, but only six hundred-ish up here in Edinburgh.  900 works well enough though, and it scans nicely.

So yeah, we're spinning.  We all know that, like night and day.  The Earth spins, the Sun comes up, the Moon does its thing and some people even bother about the stars if they're out late enough.

Most of the time I'm worrying about the sky spinning around it's a result of some nice new guest ale in the Blind Poet, but just sometimes you get a rather literal demonstration.

This is a picture of Jupiter, plus (right to left), Europa, Ganymede and Callisto. 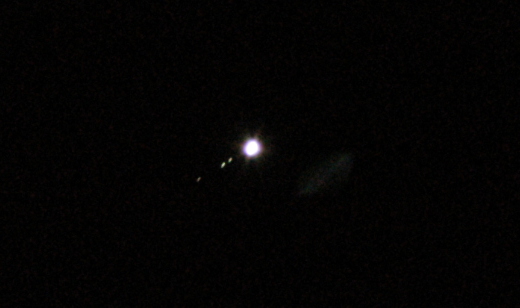 That's taken with a digital SLR (Nikon D100) on a telescope mount and a 270mm lens.   It's a bit out of focus, and there's either a lens flare or a galaxy to the lower right of Jupiter.  The main feature though, is the trail.  The tripod and camera were locked down, the sensor was set to delay until after the vibration had settled....it's not all my fault, honest.  It's not even a particularly long exposure, only two seconds.
That's how fast we're spinning.  Jupiter is whizzing past...or we're whizzing past Jupiter, depending on your reference frame.
The main point is that I took a photograph of Europa, the ice moon from 2001.

All these worlds are yours.  Except Europa.  Attempt no landings there.

They didn't say anything about photos did they?